RETURN TO LOOKING BACK WITH MALCOLM TUCKER MAIN PAGE

1979 is a year that I look back to with very mixed emotions. The visit of the full Somerset cricket team to the Rec captured the imagination of the whole village who could never have expected to see the likes of Ian Botham and Viv Richards on their own doorstep. But then in October we were all devastated to lose a real son of the village Jimmy Adams who died of a heart attack at the age of 28.

The year began with a special presentation at the Theatre Royal Bath. The recipient of a bouquet of flowers was Daisy Swansbury of Temperance Hall Cottage who had acted as a booking officer in the village for the coach firm of C.H. Field of Paulton for 30 years. The manager of the theatre did the honours on behalf of the firm.

One of the most heartening experiences in a village is to see the emergence of young talent. 1979 saw two members of the community take decisive steps towards future careers. Steve Strong, son of Eddie, himself an international runner of repute, made his football league debut for Hereford United at the age of 16. Less than a year previously he had been playing for Timsbury in the Somerset Senior League. Meanwhile Susan Chilcott was showing early signs of the singing ability that was to see her become one of the country’s leading opera performers. She won three trophies at the City of Bristol Eisteddfod and then stole the show at a Butlins talent show at Clacton-on Sea.

The Theatre Group performed the Noel Coward play “Blithe Spirit” to a very special audience. They had invited along the cast of the same play which had been staged by the Timsbury WEA Group at the Church Room (now the British Legion Club) back in March 1947. Afterwards a special re-union party was held. The Christmas production that year was “The Owl and the Pussy Cat went to Sea” with Myra Hayward as Quangle-Wangle, Margaret Robinson as Pussy Cat and Roger Bird as the Dong with the Luminous Nose. A Variety Concert was also held at Conygre Hall in aid of the Youth Club and featured Timsbury Male Voice Choir, Susan Chilcott and Fred Wedlock. Chris Fear travelled up from Middlezoy to compere the event.

The newly formed Timsbury Ladies Choir attracted a sizeable audience to their inaugural concert at Conygre Hall. They were supported by Bath farmer John Osborne , Rita Morgan, Martin Hutchins and Mary Ford. The Chairman was Mr. Wyn Davies who many will remember from his teaching days at the village Secondary Modern School. Meanwhile another well known local teacher Mr. Percy Dando was saying goodbye to the Primary school after 26 years as Deputy Head there.

Mr. Dando’s retirement came on the same day that Timsbury Cricket Club enjoyed the biggest match in its history. Well over 1000 people came along to see a benefit match in aid of Hallam Moseley between a Somerset side that contained such international stars as Viv Richards, Ian Botham and Joel Garner and the might of Timsbury. Timsbury chairman Eric Nott bowled West Indian test batsman Richards for 27 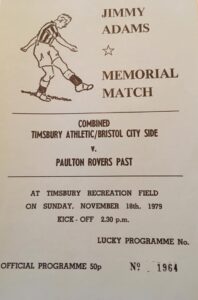 but then Botham came to the crease and smashed 113 before being bowled by Geoff Parfitt. The memorable day raised over £600 for the beneficiary and Somerset were to go on and win both the Gillette Cup and John Player League that year – their first ever trophies.

The sudden death of Jimmy Adams in October was felt by the whole village. A genuinely nice person Jimmy was an outstanding sportsman and an active member of the Football Club. Over 300 people paid their respects at his funeral service at Tabor Chapel and a memorial match was held in November in aid of his widow Jayne who had just given birth to their first son. As a lasting testimonial to Jimmy it is fair to say that he was liked by everyone who knew him.

RETURN TO LOOKING BACK WITH MALCOLM TUCKER MAIN PAGE